Hive architecture in Melliferopolis means considering the well-being of the bees and experimenting with how human city inhabitants react to the hive and its residents. This involves playing with shapes and forms, materials, locations and the concept of urban acupuncture.

With the experience gained from experimenting with alternative ways of working with bees in cities, we have learned how important it is to question the ‘traditional’ or common way of doing. This experimental questioning attitude to working with bees can reveal hidden experiences and theories related to bees and question the principal view, the automated and reductionist conception of bees are purely honey-producers and pollinators.

Early in the Melliferopolis project, the idea of creating a hive that can be a comfortable home for bees and as well serve human city inhabitants, led to the design of the Hexa-Hive. The Hexa-Hive was proposed as a possible alternative for city beekeeping that can also facilitate encounters between bees and humans. The shape of the hive is hexagonal, and the boxes can be used as hives for bees or as seats for human visitors. This double function invites humans to enter the apiary and engage with these animals from seats positioned close to the hives.

The Hexa-Hive is work in progress and has undergone many changes since its prototype was built in 2012. After installing Hexa-Hive Villages, the addition of an airstrip with specific pollinator friendly vegetation was created. Lately, the aspect of community and a Distributed Hexa-Hive Village has begun to take shape.

With the invention of the Langstroth hive in the mid-19th century, beekeeping has been revolutionised. This so-called modern hive introduces a frame system that allows the beekeeper to access and manage the hive without destroying the bees’ construction of wax and the nest. The system has considerable advantages and is the most common hive used today, alongside top bar hives and some other more adventurous shapes.

Melliferopolis has been researching hive models and aspects of the bees’ architecture through workshops and experimental constructions. During the workshops, new hives for bees have been constructed, starting the design with the well-being of the insects at the forefront of the creative process. This way of thinking aimed to question and challenge the traditional building of factories for efficient honey production, designed predominately for human ergonomics. During the workshops Bees for Architecture, Architecture for Bees in 2014 and The Other Side Architectures in 2016, we explored different architectures related to bees resulting in very unconventional constructions.

Below photos from the workshop the Other Side Architectures during Pixelache festival 2016: 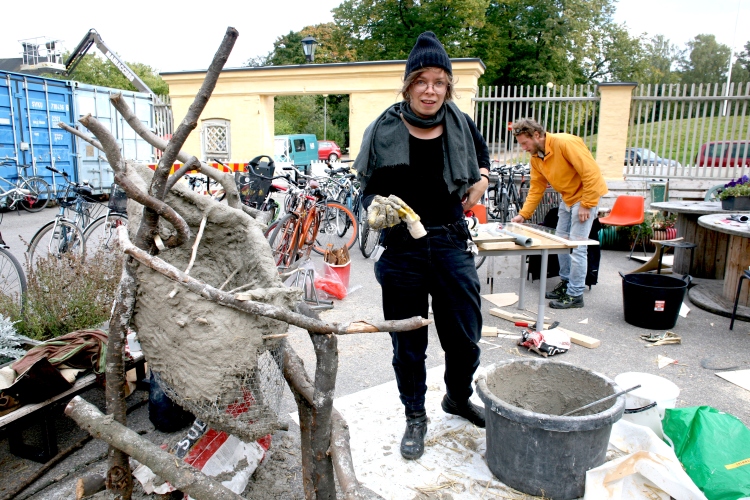