by Christina Stadlbauer and Ulla Taipale

Now! The vanishing pollinators force us, humans, to hand-pollinate the last remaining flowering crops. Almonds, being priceless – are kept pollinated. Wearing gloves and using brushes we follow the age-old ritual of insects, while remembering the delicious taste of fresh cherries… 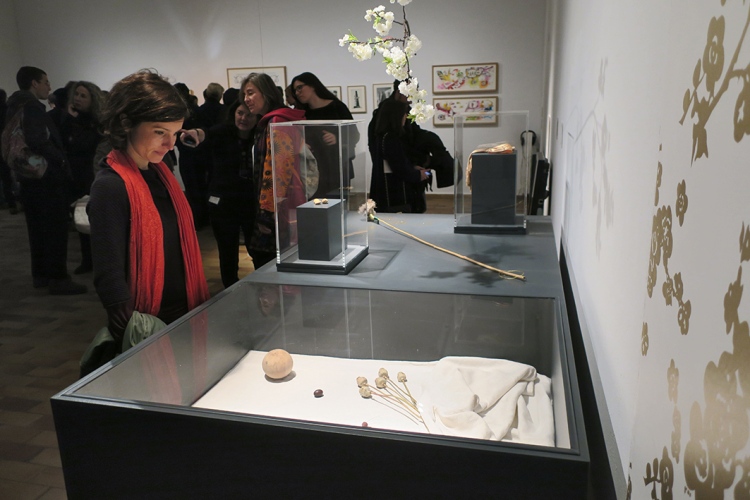 Homage to Pomona is a still life composition depicting a dystopian near future scenario. The installation is composed of a selection of pomonas*, samples of insect pollinated fruits and vegetables from the past, and by a selection of objects symbolising hand-pollination – a practice that must be done after insect pollinators have disappeared.

The composition consists of three real almonds under a vitrine, a branch of a flowering almond tree, and ritual gloves with embroidered dead bees together with a special brush for hand-pollination. The work was installed for the first time at Fundació Joan Miró, in Barcelona, as a part of Beehave exhibition.

*In ancient Roman mythology, Pomona was the goddess of flourishing fruit trees and abundant orchards. Pomonas Españolas are precise copies of Spanish fruits, modelled for scientific proposes, and are part of the collections of Catalan’s Salvador family. They were created from either drying real fruit specimens or crafted from wax and marble.

It is estimated that around 3/4 of edible fruits and vegetables across the world are in danger of extinction because of the loss of pollinating insects. In some parts of China, the use of human labour to guarantee pollination of fruit trees is already a common practice. Homage to Pomona comments on the imminent situation caused by the decline of pollinators.

Homage to Pomona is an installation by Christina Stadlbauer and Ulla Taipale. It was exhibited as a part of Beehave exhibition 15.2.-20.5.2018 curated by Martina Millá Fundación Miró, Barcelona, Spain